Home › Young people › A day in the life of... a Script Editor

A day in the life of... a Script Editor

As a Script Editor for Eastenders, it's Toby Bentley's job to ensure that the soap is as entertaining and well-written as possible. He makes sure that each episode's script is punchy (in both senses), logical and interesting. As part of our Reading Activists' In the Loop campaign to share information about how young people can get involved in creative reading and writing, Toby gave us an insight into his job, as well as some advice for anyone looking to follow in his footsteps.

What does a day in the life of a Script Editor look like?

My job is dozens of jobs rolled into one. You could be reading scripts, briefing writers, meeting with the producers, talking to directors, visiting the set to clarify story points for the cast... EastEnders is a huge beast of a show and there are many, many plates you have to keep spinning. Genuinely there is no set routine and no two days are the same. You have to be organised and flexible.

Each Script Editor on EastEnders is responsible for a week of episodes on a rotating basis. You don't write the scripts but it is your job is to make sure each script is as strong as possible, and make sure each episode fits in with episodes either side. This means talking to writers, or sending them often long sets of notes, so they understand what you and the producers want from the script, how you think they can improve it - but without telling them exactly what to write.

It's a tricky balance to get right. And sometimes a writer will have their own, better idea about how to improve a script, which you then have to sell back to the producers. It's a job where you must have strong, creative ideas but also be a diplomat and a salesman at the same time. You go through five or six drafts of every episode before the scripts are ready for filming, with script deadlines almost every week, and this same process repeats itself at every draft.

Once a script starts filming, you then become the first point of contact for the cast and crew. If there's a problem with a line or a scene, you might be called down to set to look at the script again to work out how best to solve it. Since you could be working on different weeks of episodes at a time, all at various stages of the production process, you have to be prepared to shift between different headspaces from one hour to the next.

If your job itself was a character from Eastenders, which character would it be, and why? 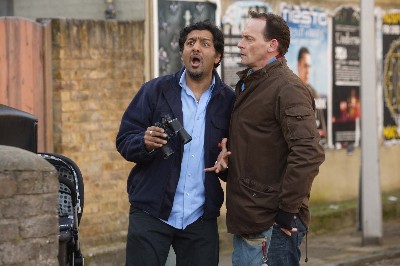 Masood. Like Mas, you always need to keep a smile on your face and battle hard to keep everyone happy, no matter what crisis you encounter. "Blitz Spirit" is one of the defining characteristics of EastEnders, and it's often just as important off-screen.

When did you decide you wanted to become a Script Editor and how did you set about pursuing this?

I loved directing plays at university, but knew I wanted to work with scripts long-term, since they are the starting point for any play, TV show or film. My ideal ambition was to write myself and have a day job working with other writers, so I saw script editing as the perfect job to aim for - and then I'd see what happened after that.

I used job sites like mandy.com to search for script reader work and work experience in the industry, just to get my foot in the door and start filling up my CV. I also continued to write myself and had temp jobs to keep the money coming in. Paid reading work then became more regular, and some of the producers I'd met along the way asked me to help out with TV and film projects they were developing. It wasn't lucrative but I earned enough to keep working with scripts and to keep meeting people in the industry.

I was lucky enough to be offered a place on the BBC's Production Trainee Scheme, on which I trained as a researcher and was given the chance to do two drama work placements: one in TV and one in radio. Those experiences put me in the perfect position to get a job as Story Researcher on EastEnders when the Scheme ended. After a year in that job, researching all the storylines, including Whitney's sexual exploitation storyline for Comic Relief, I became the Development Editor, finding new writers for the show. From there I was then was offered the chance to script edit an episode - and when that went well, I started editing episodes more regularly until I became a full-time Script Editor.

Climbing the ladder is nearly always about hard work, persistence and a little bit of luck.

Read the second half of our interview with Toby.

If you're aged 11 to 19 years-old and you'd like to write a piece for our website get in touch with Robert Sommerlad.