Here's the second part of our interview with Eastenders Script Editor Toby Bentley. Here Toby talks cliffhangers, getting into TV, and Doofs.

What advice would you give to any young people who would like to work in a similar role?

The truth is there is no fool-proof path to becoming a script editor or producer. TV is like any creative industry in that the demand for jobs is very high. You have to be prepared to be patient and keep getting experience under your belt whenever and wherever you can. It will make you look committed to employers, and means you are more likely to be in the right place at the right time when a job does come up.

The most typical route involves starting as a runner on a show like EastEnders and - by being helpful and friendly, showing you have ideas, and putting the hours in - you can usually work your way up. The BBC has a scheme called the Production Talent Pool which is definitely worth checking out, and other channels have similar schemes.

However you manage to break into the industry, a passion for TV and the genre you want to specialise in is vital, whether that's drama, comedy, entertainment or documentaries. Nothing disappoints potential employers more than people who don't seem to care or know anything about the sort of programmes they want to work on. There are more people than you might imagine out there who prefer the idea of 'working in TV' to TV itself, so demonstrable passion and knowledge will give you an instant edge.

So watch a lot of telly and be a geek about it.Think about what works or doesn't work for you, and write it down. Analyse drama or comedy shows, look at individual scenes, and think about what the writer is aiming for. How have they succeeded or failed? Were too many scenes talky? Did not enough happen? Did you not buy certain moments? Was the main character too self-obsessed or too weak?

And if you do really enjoy a show, tell the people who make it. Write down the names of producers, writers, script editors, directors, and then try to get in touch with them. Email addresses are usually easier to work out or find online than you'd think. Don't be too demanding or harangue people, but do tell them what you admire about their work, why it affected you.They might even reply and that means the lines of communication are then open between you. In the best-case scenario, they might even have something to offer you in return for your insight and kind words... 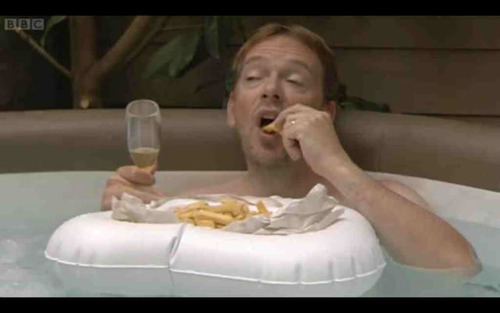 What three things does every good soap story need?

Viewers remember the villains on EastEnders: Steve Owen, Phil Mitchell, Archie Mitchell, Janine Butcher, Yusef Khan, and so on. Villains are essential because they know what they want, are happy to trample over what other people want to get it, and therefore create conflict. Conflict is at the heart of any dramatic story, whether that's in soap, a bigger TV drama or a film. It gives a story purpose from the start, and gives it tension too. As with sport, someone must ultimately win, someone must lose. Without that conflict, and without obstacles stopping characters getting what they want, stories become predictable and boring.

The second element of any great storyline is what's known as 'stakes' - or what's at stake if your character doesn't get what they want. Does it really matter to them and the audience if they don't get it? If not, the audience won't be bothered. That doesn't mean that what the character wants has to be hugely valuable - like a big bundle of cash - it just has to be hard to attain and will change their life and the lives of those around them if they succeed. Look at Lola wanting to get her baby back, Yusef wanting to steal Zainab back from Masood, Syed wanting his family to accept he's gay, Little Mo wanting Trevor to stop abusing her... all of these storylines mattered because the consequences of success or failure were huge to both the characters and the viewers.

Any great storyline will also be about change. What does your character learn, how do they change when they get what they want - or fail? If your character is in the same place at the end of an episode as they were at the start, then it's simply not a story. You need to move them on in some way. That's difficult in soap because once your character has finally achieved what they want - whether that's money, success, love, a family - their journey is over. And yet some characters on EastEnders have lived in Walford for years, so we constantly have to look for new objectives for them. It's why Zainab, Ronnie, Phil, Ian - any iconic character you can think of in fact - will almost certainly have had more than one memorable storyline. The best characters are constantly evolving.

And this is cheating, but the fourth ingredient any good soap needs is a corking cliffhanger. You've spent all episode building to that hugely dramatic point. If you give viewers a limp episode ending, they'll be disappointed and you'll have failed to entice them into watching the next one.

Which is your favourite of the Doofs from the theme tune?

It has to be the first one, doesn't it? When that drum sound crashes in as one of our main characters has just done or learned something shocking. If I was having a bet on which character gets the "doof doof", as some people do, it's that first drum beat which would decide who wins it for me. And here's a little tip for anyone who does bet with friends or family on the cliffhanger: more often than not it will be a character who appears in the first few minutes of an episode who'll get the drums at the end.

If you're aged 11 to 19 years-old and you'd like to write a piece for our website get in touch with Robert Sommerlad.