The Etherington Brothers have been producing original comic material since 2003 with Robin writing and Lorenzo illustrating. They have created Malcolm Magic, Monkey Nuts, Baggage and YORE! They have also produced comic work for Transformers, Star Wars, How to Train Your Dragon, Angry Birds, Wallace and Gromit, Terminator Salvation, Monsters Vs Aliens and Madagascar.

They are currently working on Long Gone Don and The Dangerous Adventures of Von Doogan for The Phoenix and Lorenzo's book Von Doogan is in this year's Summer Reading Challenge collection. We were lucky enough to chat to them about their work and get some advice for any Reading Activists interested in a similar career.

1.What does a day in the life of a comic writer/illustrator look like?

Lorenzo
My studio is in my house, so I dish up a big bowl of cereal (essential) and then sit down and start sketching a new page. I always have a lot of reference and inspiration around my desk to motivate me to keep experimenting and trying to improve.

While I work, I listen to old radio adventure serials from the 1940s, as they have just the right amount of cliffhangers and danger to keep me rooted to the desk! By mid-afternoon my main work on the page will be done, and then I spend a few hours working on the other elements of making a comic - planning stories, designing covers, laying up books or designing new characters.

Robin
Whenever possible, my mornings are spent on NEW writing. This means working up whatever book or comic project(s) are currently in production. I find I write better in the morning, after a good night's sleep. I've now got a little baby boy, so my mornings are usually filled with nappies ... and there's rarely been any sleep, good or otherwise.

I start by reviewing what I wrote the day before, editing it to add 50% more jokes, and generally sorting spelling errors and mistakes, of which there are many. If my brother has sent me any comic pages to letter, edit or simply enjoy, I'll usually interrupt my other work to get stuck in! I'm extremely easy to distract.

The afternoon is spent planning and developing new material, including new chapters and pages for existing projects, as well as responding to email and answering questions. I'll use this time to research franchised material I'm working on; watch films or TV episodes for shows that I'm writing comic strips for ( Transformers, How to Train Your Dragon, Star Wars, etc); and change many more nappies.

In the evening I'll try and read a book, a comic book or a graphic novel or two for inspiration. There are so many great stories out there to discover. Great writing keeps my mind whirling with new possibilities for comic adventures.

2. What advice would you give to any aspiring young comic writers/illustrators?

Lorenzo
Create something you love, something which is personal to you and not an imitation of whatever the latest fashion in publishing is. If you stick to that, you'll always be proud of your work and be motivated to continue creating.

Robin
Always try and finish what you start, be it a single drawing, a short story, a three panel comic or something larger. The trick to succeeding as a comic creator, or any artist, is to MAKE things. This might sound really obvious, but it can be hard to stop tinkering with a picture or story when you're near the end. There always seems to be something you can improve, but if you never stop perfecting each individual piece of work, you'll never start the NEXT drawing. And the next drawing will always be better!

3. When did you decide you wanted to write/illustrate comics and how did you set about pursuing this goal?

Lorenzo
When I had just graduated from university. My brother and I got together and decided to just start making comics ourselves, getting them printed and selling them at comic conventions. It was a lot of work, but within a couple of years enough people had heard of us that we started getting offers from publishers and it went from there.

Robin
I actually came to writing late in life, having initially pursued careers as both a musician and a snowboard guide. It was only after a long conversation with Lorenzo that I decided to have a serious try at conjuring up my own comic book. It was always something we'd fantasised about. To this end Lorenzo and I wrote, drew, printed, stapled, cut, bagged, priced and sold our debut comic (a 320-page comedy adventure called Malcolm Magic) over three and a half years, visiting comic conventions all over the United Kingdom to sell our adventures to fans and friends and strangers. It was a real learning experience and we met hosts of amateurs and professionals along the way who helped inspire us.

Then, shortly after the end of that comic, Lorenzo (and then myself) were offered freelance jobs working on Dreamworks' Madagascar comic, which in turn lead to a meeting with David Fickling from which relationship Monkey Nuts, Baggage and now Long Gone Don were born.

Looking back I now know that those three and a half years working for ourselves, physically making thousands of comics and books, and hand-selling each and every one, was the key to getting noticed. It was the time we needed to work out what sort of stories we wanted to tell, and to appreciate the work that's required to make a comic book stand out.

Lorenzo
It's great! We understand each other so well that we just know what the other person wants out of the creative process. 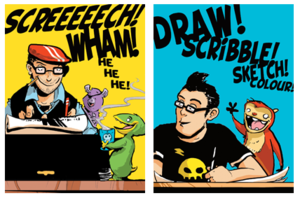 Brilliant. As brothers we have an instinctive understanding of what the other is looking for in a comic project. Growing up we shared many of the same creative interests and when it came to working together as adults we found we'd retained the same enthusiasm for the material.

Our creative process is also very orderly: Lorenzo handles all art, and I handle all the words and story. This means we never tread on each other's toes. It keeps life simple and stops all potential arguments!

5. Who are your favourite comic heroes or villains?

Lorenzo
Calvin and Hobbes. Those two hold a broader range of emotions and personality that you could possibly squeeze into any other 100 characters.

Robin
Characters are hard to choose, but my favourite comic book series are Asterix by Goscinny and Uderzo, Calvin and Hobbes by Bill Watterson, Akira by Katsuhiro Otomo and the Dungeon series by Lewis Trondheim. All fantastic from start to finish!

6. If you could have a super power, what would it be and why?

Lorenzo
I'd have the power to be able to slow down time, so I could draw an entire book in a day and take the rest of the year off!

Robin
The ability to listen to audio books or podcasts on my headphones while I write! Lorenzo enjoys that pleasure as he draws, but I find it impossible to listen to anyone speaking while I'm trying to write my own thoughts down. I'm missing out on a great opportunity to soak up extra creativity! And not needing to sleep would be extremely useful ... but I LOVE sleep, so perhaps not!