In April 2013 the Dulverton digital reading clubs project was launched in five library authorities across the North East and North West of England. Reading Activists from Gateshead, South Tyneside, Warrington, Halton and Lancashire Libraries were tasked with equipping 200 young people aged 11 to 19 with new skills by making digital content around books and reading.

The first six months of the project have been a huge success, with the project well on track with aims and targets. 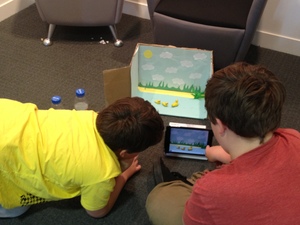 Highlights from the past six months include:

The first Digital Proficiency was stop motion animation. Using a mixture of toys and plasticine, young people created short animated videos that brought their favourite book characters to life. The videos were shared online and served to encourage other young people to read the book to meet the character(s) for themselves.

To date, two groups of young people with varying degrees of autism and Asperger Syndrome have completed a Digital Proficiency. Feedback from the professionals who work with these young people has been extremely positive.

A member of the support Staff from Jarrow School said about one pupil who took part in the project: "[He] never talks to people he doesn't know. The fact that he came and asked you for help and took you back to his work means that he's really enjoyed today." 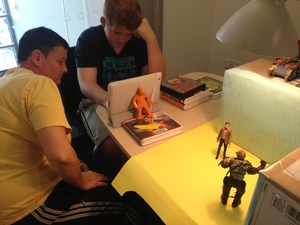 Kirsten from Warrington Libraries said: "I have thoroughly enjoyed the animation workshops, and would certainly take part again. Everyone was very friendly and helpful and made the whole experience even more fun."

Nick from Gateshead Libraries said: "Really good fun. I will use the skills I have gained to make a second animation at home!"