Today, on Shakespeare's birthday and UNESCO International Day of the Book, thousands of passionate book lovers, authors, libraries, bookshops, prisons, hospitals and schools in communities throughout the UK are coming together to share their love of reading for the fifth annual World Book Night, The Reading Agency's annual celebration of books and reading. It sees a huge range of passionate volunteers give hundreds of thousands of books away in their communities, to share their love of reading with people who don't read for pleasure or own books.

250,000 books, made up of 20 specially printed World Book Night titles, are being given out by a 10,000 strong network of volunteer reading enthusiasts and institutions focusing on reaching the 35% of the population who don't read for pleasure. As well as the volunteers, World Book Night is asking everyone to go out and buy their favourite book to then give to someone in their community, inspiring them to begin their reading journey. Since it began in 2011, World Book Night has created an extraordinary group of 56,000 volunteers, giving books away to over 2.25 million people, in an effort to inspire reluctant readers, and encourage people to make reading a part of their lives. 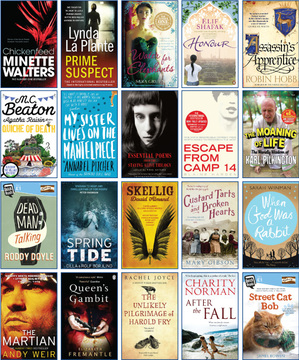 Celebrated author, screenwriter and winner of the 1993 Booker Prize (now Man Booker) Roddy Doyle is brought to a new audience thanks to a Booker Prize Foundation initiative to build a bridge between literature and literacy with his first Quick Read title, the spooky comedy Dead Man Talking and TV and radio personality Karl Pilkington's comedy, The Moaning of Life, should tempt those who are not yet regular readers. Thanks to the generosity of Bloodaxe, Jerwood Foundation and Forward Arts, World Book Night has included a wonderful anthology of poetry on the list for the first time, Essential Poems from the Staying Alive Trilogy edited by Neil Astley, which has been very popular among individual volunteers and institutions.

I'm really pleased that one of my books is to be part of World Book Night. What a great, optimistic, liberating, democratic project. What a wonderful way to celebrate one of humankind's greatest creations. What a truly creative way to encourage people to read one book, then another, then another, to encourage people to become lifelong readers. The Reading Agency and World Book Night are forces for development and change. They really are helping to create a better world.

It is a great honour for me that 'Prime Suspect' has been chosen to be part of World Book Night 2015. I hope that it might entice someone to the pleasures of reading as 'Prime Suspect' was a very successful television drama starring Helen Mirren. It is wonderfully heart-warming to think that a reader I have never met can be drawn into my story, be introduced to the characters I have created and experience some of the emotions I felt whilst writing the book. It is quite overwhelming. I hope that all of the chosen books bring huge enjoyment to readers worldwide.

Events across the country

World Book Night 2015 is focusing on reaching out to as many readers as possible from all parts of the country and thousands of public participation events through partnerships with libraries, bookshops, communities and charities, will be taking place in venues and open public spaces in celebration. The World Book Night flagship event, a glittering celebration of reading and the written word, will be taking place at the Shaw Theatre in London tonight with World Book Night 2015 authors Lynda La Plante, David Almond, Sarah Winman, Elizabeth Fremantle and Annabel Pitcher alongside acclaimed novelist Irvine Welsh and rapper and poet Akala. Performers will take to the stage to tell the audience about their reading journey and the books that have inspired them.

In addition to the event in London, regional events at public libraries will take place nationwide, including appearances from previous World Book Night author Alexander McCall Smith in conversation with The Scotsman at Edinburgh Central Library and crime writer Stella Duffy, who will be appearing at Woolwich Library in Greenwich.

A record number of institutions and organisations (2,700) are taking part this year including homeless hostels, hospitals, learning support centres, social housing projects, prisons and young offender institutions, schools and charities - all eager to change someone's life by the gift of a book in this mass celebration of reading. British Library staff are handing out British Library crime classics and World Book Night titles in two locations: Chalton Street Market in Somers Town in London and the Crossgate Centre in Leeds; and, as Patron of the Friends of Erlestoke Prison, Her Royal Highness The Duchess of Cornwall is donating a complete set of the 2015 World Book Night titles to HMP Erlestoke prison library, following a visit there last November. Her Royal Highness is a passionate supporter of reading initiatives and has supported World Book Night by donating books every year since it started in 2011.

Among the hundreds of inspiring stories of institutional book giving are Ashworth high security psychiatric hospital in Merseyside where the books are an essential component of rehabilitation and a homeless centre in Barnsley where books are used to instil an enthusiasm around reading and to give clients something of their own.

Parcel carrier Yodel has delivered over a quarter of a million books for World Book Night to every corner of the UK and Ireland, setting the nation on its reading journey. 2,700 institutions and organisations have each been delivered multiple sets of the 20 titles, while 7,300 individuals have been given a box of 18 copies of one of the books in this landmark year, which they collect from local libraries and bookshops around the country. Yesterday (22 April), World Book Night author Mary Gibson was on hand at John Harvard Library in Bermondsey, London to help Yodel deliver copies of her bestselling novel, Custard Tarts and Broken Hearts to volunteers.

Find out what World Book Night events are taking place near you.