"There is nothing in this world that could be closer to my heart than the work and goals of The Reading Agency." - Peter James

Celebrated crime author Peter James will pledge his on-going support for our work at the launch of his new novel Dead Man's Time. At the event on 6 June at the Amex Football Stadium in Brighton, he will announce to a 600-strong audience that he will be helping to raise awareness about our charity at all his upcoming events, and asking his fans to donate to the cause.

Peter James says: "The Reading Agency helps thousands of people to love reading and is doing hugely important work with libraries to reach readers in every kind of community. Nothing in the world could be closer to my heart than the charity's work and goals. I am adopting it as my national charity."

"At every event I do, I'll be raising awareness of the charity's work, and asking people to donate to help it make an even greater impact. We all take a love of reading for granted, but there are millions of people who struggle with reading and can't participate properly in education, employment, cultural or community life. Help me help The Reading Agency to change that."

In another 'first' for us, there will be an exciting opportunity to 'win a character' in
Peter James's next book. Those who donate via text will be notified when the competition is open later this year.

Miranda McKearney, says: "Peter James has the most enormous fan base. Having his backing will help us mobilise a whole new army of supporters who believe as passionately as we do in the importance of everyone being able to read confidently and enthusiastically. Peter's warm hearted endorsement of our work is extraordinarily cheering, and will help us reach out to many more people struggling to enjoy reading." 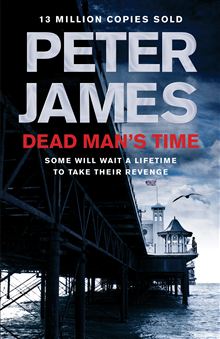 Peter James is one of the UK's most treasured crime and thriller novelists. His Roy Grace detective novels have sold over five million in the UK alone and thirteen million worldwide in total. The series is now translated into 36 languages. Peter's most recent Roy Grace novels, Dead Like You, Dead Man's Grip and Not Dead Yet went straight into the Sunday Times bestseller
lists at no 1 in both hardback and paperback.

Dead Man's Time, published by Pan Macmillan on 6 June, is the ninth novel in Peter James' award-winning Roy Grace series. When Roy Grace is called to the burglary and assault of an elderly woman in her Brighton mansion, it appears to be a common, yet unusually brutal, antiques robbery. Millions of pounds worth of priceless collectables are missing, but to the Daly family there is only one item that is irreplaceable; a pocket watch that holds unimaginable sentimental value. As the burglary case becomes a murder inquiry, Detective Superintendent Roy Grace must act quickly to track down those responsible. But he is not the only one who wants to crack the case. The Dalys are prepared to do anything to get the watch back, including taking the law into their own hands. As Grace delves deeper into the case, his journey leads him from the corrupt underworld of the Brighton antiques trade to the sinister 'Costa Del Crime' and right back to the feuding gangland waterfronts of 1920's New York. It is a case that will push Grace to his limits, and time is running out...

You can donate to the Peter James Reading Agency appeal at www.justgiving.com/PeterJamesBook. Read how other authors have been supporting us through our author fund.

When you get a chance to read Dead Man's Time tell us what you think on facebook and twitter or tell Peter James directly using @PeterJamesUK on twitter.

"When you've always been able to read and write you take it so for granted you don't realise how lucky you are. I certainly didn't."