(All photos by David Lindsay)

England international Jamie Jones-Buchanan was the star guest at today's special event alongside the Rugby League World Cup trophy which was on display for the afternoon as part of its tour around the UK, Ireland and France ahead of this coming autumn's major international sporting event. There was also a special rugby league 'family quiz trail' around the library, the chance to play a rugby league X-Box game, entertainment with poet Craig Bradley and Ronnie the Rhino, official mascot of Jamie's Leeds Rhinos team, joining in the fun. 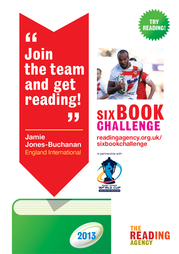 Although he didn't get into reading until he was in his twenties, Jamie is now a keen reader. An official champion for the Six Book Challenge, he has signed up to take part himself and is encouraging sports fans who might not otherwise pick up a book and enjoy it, or anyone wanting to develop a reading habit, to do the same. This year, specially branded RLWC 2013 materials are available to Six Book Challenge participants, including quotes from Jamie and book recommendations at all levels for rugby league enthusiasts. People who have completed the RLWC 2013 Six Book Challenge will have the chance to win tickets to the major games in the international tournament this autumn.

Jamie told Leeds Central Library visitors: "When I was young I used to see other people reading, especially girls, and I always wished I could read like that. But for me at that age it was futile - I would start reading something but I'd get to the end of the page and I'd have forgotten what I read. Now I read with my three sons as often as I can. It's important to make time for reading - it's like food for the soul. My life is more rounded now because of reading. My message to any rugby league fans out there thinking of signing up for the Six Book Challenge would be just give it a go. Don't be shy or embarrassed, even if you haven't read for a long time. No one will be judging you and it can only bring you good things."

National charity The Reading Agency launched the Six Book Challenge in 2008 as a simple but powerful way to encourage less confident readers to develop a new reading habit, and help tackle the UK's continuing skills deficit: there are 5.1m people with low literacy skills in England alone. Participants in an ever-growing variety of Six Book Challenge settings - such as workplaces, further education and sixth form colleges, public libraries, army education centres, prison and youth offender institutions - are invited to pick six reads of their choice and record their reading in a diary in order to receive a certificate. Ninety per cent of respondents in a recent Challenge survey said they felt more confident about reading after taking part. (See "Notes to editors" for more information.)

Last year 23,500 adults registered for the ever-growing Six Book Challenge, a 30% increase on 2011. It got off to a great start for 2013 at Leeds Central Library, with nearly 40 families and individuals signed up during the afternoon's celebrations by library staff, which coincided with National Libraries Day (9 February). Other libraries around the UK are now also preparing to promote the Six Book Challenge in the build-up to the Rugby League World Cup.

The Reading Agency is an independent charity with a mission to give everyone an equal chance in life by helping people become confident and enthusiastic readers. Its adult literacy specialist, Genevieve Clarke, said: "We're thrilled to be working with Jamie and the Rugby League World Cup to get more people into reading and Leeds Libraries have kick-started our new partnership with a great launch today. This gives a whole new dimension to the Six Book Challenge which will take us to different audiences."

RLWC 2013 marketing manager Mark Foster said: "We're using the next major UK sporting event after the Olympics to inspire, motivate and educate as many people as possible. The Six Book Challenge is an important part of this."

Councillor Katherine Mitchell, Leeds City Council's support executive member for leisure and skills said: "Rugby league is hugely popular in Leeds, with Jamie Jones-Buchanan being an inspirational local figure to lots of people, both young and old. I hope that his enthusiasm for the Six Book Challenge will encourage other sport fans to pick up a book and share his love of reading. We're immensely proud to be a host city for RLWC 2013, and it's great to have had the prestigious trophy back in the city for people to see and enjoy ahead of the Leeds hosting its first game between World Champions New Zealand and Papua New Guinea on 8 November."

Rugby league fans Glenn and Ruth brought their young sons Dominic, aged ten, and Alex, aged eight, to the event. "It's the rugby that got us here," said Ruth who works for Leeds City Council. "Signing up for the RLWC 2013 Six Book Challenge will make us think about reading as a family."