Plans are afoot to make international bestselling and award-winning US novelist David Baldacci a top 10 most borrowed author from UK public libraries. Publishers, library staff and reading and literacy campaigners are working to get him challenging some of the biggest-name authors at the top of the ratings.

In a unique new partnership project created by us and Pan Macmillan which will transform the way publishers and libraries work together, taking place in over 500 public libraries across 35 UK local authorities. Readers who visit libraries to borrow 'most borrowed' books, will be targeted with 'shelf talker' information about David Baldacci. Each participating library has been given marketing materials (including posters, bookmarks and newsletter copy) and 100 copies of David Baldacci books for each library authority, as well as review postcards for readers who borrow Baldacci books to fill out.

The campaign starts this week, with the free books and other materials already dispatched to libraries across the country.

"I am both honoured and thrilled to be part of this initiative. I hope readers enjoy exploring my novels as much as I enjoy writing them," says David Baldacci.

The new library campaign will run until the end of February 2013. A key part of it will involve staff at participating libraries creating 'review boards' of readers' comments with feedback on David's books, as well as photos of the contributors. There will also be a competition for the best review board. The result will be announced in January and the winning library will get a case of wine for their staff and £100 to spend at panmacmillan.com

Our publisher and library consortium, Reading Partners, which creates successful and exciting events and activities for readers, has led the work on this project.

"It's clear from the response we receive from readers - both men and women alike - and the reviews that David receives, that there is a real passion for David's books. He writes well-plotted, action-packed, edge-of-seat thrillers with terrific characters. We feel that there are many more readers who would love his books," says Trisha Jackson, Pan Macmillan Fiction editorial director.

One of David Baldacci's early thrillers, Absolute Power (1996) was made into a major Hollywood movie directed by Clint Eastwood, also starring Clint Eastwood and Gene Hackman. A more recent bestselling novel, Wish You Well, has just gone into production. Darnell Martin ("Cadillac Records") is directing the film; David Baldacci wrote the script and is also producing. 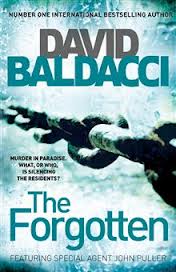 His latest thriller is called The Forgotten. It is about a murder investigation in Paradise, Florida where its inhabitants are more akin to Hell than Paradise.

David Baldacci has now published 24 novels, all of which have been national and international bestsellers, translated into more than 45 languages and sold in more than 80 countries. He has received numerous accolades for his writing; most recently, he was inducted into the 2011 International Crime Writing Hall of Fame and received the 2012 Barnes & Noble Writers for Writers Award. David Baldacci has set up a literacy foundation, the Wish You Well Foundation, which is a nonprofit organization that works to eliminate illiteracy across America.

Peterborough's Central Library is one of the many libraries around the UK taking part in this project. Librarian Elaine Wilkinson explains: "What happens when you have read all the books by your favourite author, and don't know where to go next? We love the idea of introducing our borrowers to a great author they may never have tried, and giving them the chance to interact with other readers too. The opportunity to add their comments and reviews for others to read is a fantastic part of this promotion, word of mouth from 'real readers' is one of the most popular ways people try something new."

Sandeep Mahal, who leads our Reading Partners consortium, says: "I'm excited by the potential of this very ambitious campaign, which is all about increasing engagement with readers with a big brand author, David Baldacci, whom readers of thrillers are very likely to enjoy. It will also help to increase borrowing and get more people reading and talking about David Baldacci, and will hopefully push him up the most borrowed chart. In these tough times, it's really great to see Pan Macmillan continue to invest their marketing resources, skills and creative ideas in libraries' work with readers."

"When you've always been able to read and write you take it so for granted you don't realise how lucky you are. I certainly didn't."