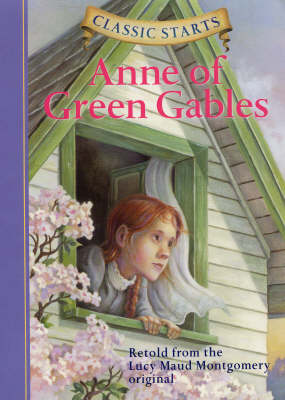 An abridged version of the tale of Anne, an eleven-year-old orphan, who comes to live on a Prince Edward Island farm and proceeds to make an indelible impression on everyone around her.

The bit I loved best is when the man died because it made me feel emotional.

I would recommend this book because it is historical and funny. It is about an orphan named Anne who never stops talking and she gets into all sorts of mischief, including walking a really high ridge pole and getting her friend, Diana, drunk! I must also point out that Anne is a redhead. Any redheads out there please like!

I really liked about it being old fashioned and learned what it was like in the olden days.

It was a bit boring

I think this is a wonderful story full of tragic, happy, funny and exciting events which conclude into the life of a small and imaginative girl. She is desperate to win someones heart and she will do what ever is in her power to gain them. though there are tragic events in her life she puts them aside and fights for a space in her home, school and village. She has losses in her life but stil she will do her best to make up to them.

My fave book in the whole world. Anne Shirley is a young orphan girl with red plaited hair and freckles and a big sense of talk.

I definitely recommend this. Really interesting Anne is a daydreamer and i am too!

Anne of Green Gables is a book that transports you to a whole new world. A world that is littered with joy and apple blossoms. However, when Anne arrives at Green Gables she soon realises that not all dreams come soon. Anne, adopted from an asylm, finds out that her foster parents didn't send for a girl but for a boy who could help with their farming. Can Anne stay at Green Gables? Read the book that's reccommended for imaginative girls and boys.

This book was extremely interesting.

Everyone in the book club finished and enjoyed this book, we found the characters and the place setting to be utterly charming and not at all annoying as some people seem to have. We felt that the place of Green Gables and Prince Edward Island are so beautifully described in the book that they fell like another character. You felt as though you could step in through the pages and you would know exactly what everything looked like, and even in some cases smelt like! The way that Anne looked at things and used metaphor to describe them made it much more easy for us as readers to visualise things rather than a long list of descriptions. We felt that Anne herself was a very capable and intelligent young girl who just happened to have grown up in a bad environment. Given her formative years weren't spent in the best place she seems very confident and self-sufficient, quite a lovely girl in fact. She does have a tendency to become distracted and may over-react to some situations but she never means anything but the best for everyone she meets. This is why we were a little confused as to why she hated Gilbert for so long. Was it because she felt a spark towards him and didn't know what to do about it? Or did she really just hate having been called carrots? Anne really was someone who looked for the good in everyone and everything. Even when bad things happened she took a few minutes to herself and came out with a positive from it. We thought more people should be like her, but it such a difficult thing to do. Looking at the world through Anne's eyes made us all think about the world a little differently, and that's not a bad thing. Overall we gave this book 9 out of 10.

It was a bit old for me but mummy liked it

Anne is always getting into trouble but never forgets her manners...Well most of the time.

This book was amazing. I really liked the attention to detail of this book. I really thinks you should read it.

A must read for people who like adenturous, imaginative stories. The is also a series on Netflix about it, but I suggest you read the book first.

i think this is the worst book ever