Public library staff in Warrington are in an ideal position to make good use of our new partnership with the Rugby League World Cup 2013. They are among our best performers for the Six Book Challenge since its launch in 2008, winning a bronze award in 2012 for achieving 78 completers. And they have worked with rugby league club Warrington Wolves as part of their community programme for the last eight years. "We find our local rugby league players are great role models for reading," comments Janet Puzylo, Development Librarian for Reading at Warrington Livewire.

The library service is also one of 30 in the north of England which are part of 'Try Reading', a special project linked to RLWC2013 and funded with an award of £199,700 from the National Lottery supported £6 million Grants for the arts libraries fund. This will include over 150 events with a sporting theme, including author talks, writing workshops and drama events, between April and November 2013, alongside use of the RLWC2013 Six Book Challenge materials.

Livewire has developed a Rugby Reading Champions scheme targeted particularly at dads and lads in deprived areas who may be reluctant readers or struggle with literacy, numeracy and IT. This takes the form of six weekly sessions involving quizzes, games, book buying, a stadium tour, ICT and reading challenges with the players acting as role models. Participants say they feel the scheme has improved their skills, confidence and motivation. And for Warrington Wolves the partnership has brought in new audiences for rugby league and personal development opportunities for their players. 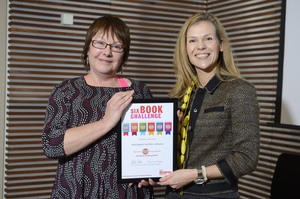 As Janet explains: "Attention from the players makes people feel special and their reading recommendations have a powerful impact. It's great to see families enjoying themselves together." (Janet is pictured, left, receiving her bronze award at the 2012 Six Book Challenge celebration. Picture by Tom Parkes)

Participants clearly agree: "I'm going to miss the sessions and the group," commented one parent. "I've really enjoyed the relaxed atmosphere and fun we've had." Another said: "I've been motivated to read by being involved in this project and by being inspired by some of the youngsters."

Livewire link with Priestley College, Warrington Collegiate, adult and family learning, ESOL, children's centres, HMP Risley and workplaces such as the local hospital to reach people at all levels of literacy through the Six Book Challenge. The special RLWC2013 materials will give them an extra tool to engage sports fans who may not be confident readers.

If you would like to take part in the Rugby League World Cup 2013 Six Book Challenge contact your local public library.

If you work in a library, school, college or work place which is thinking of running the Six Book Challenge in 2013 please consider adding a rugby league element by using our special Rugby League World Cup branded materials. See also Guidance for the Rugby League World Cup 2013 Six Book Challenge which includes information about special prizes on offer for completers and organisations.

Other libraries have been partnering with local sports teams to promote the Six Book Challenge. Read about Southend United players' visit to a sign-up event at Southend Library in late February.