A fascinating discussion on identity, punishment and prison reform took place at the Free World Centre on 11 March to mark the tenth anniversary of the publication of seminal young adults' thriller Looking for JJ by Anne Cassidy, together with the release of its long-awaited sequel, Finding Jennifer Jones.

Award-winning author Cassidy was guest of honour at the free event which we jointly hosted with her publishers Hot Key Books and children's book distributors/publishers Scholastic UK. Joining her, and debating in front of an audience were her editor Emma Matthewson; David Kendall who works with the Six Book Challenge adult literacy work in prisons; Juliet Lyon OBE who is director of the Prison Reform Trust and teen literature expert Wendy Cooling MBE (pictured above, left to right with Anne Cassidy in the middle). The debate was followed by book signing by Anne Cassidy, and a drinks reception.

Listen to the full panel discussion and audience questions. 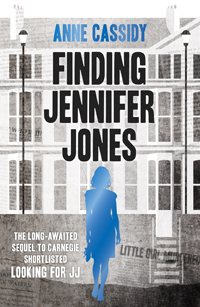 Published in 2004, winning the Booktrust Teenage Prize and shortlisted for the Carnegie Medal and the Whitbread Book Award, Looking for JJ explores the circumstances and motives behind the shocking murder of a child ... by a child. Finding Jennifer Jones powerfully follows the now-adult murderer as she tries to pursue an ordinary life before her past catches up with her. It is a tense, emotional thriller about guilt, running away and wondering if you can ever truly know yourself, and both books proved ideal starting points for exploring how books and reading can be powerful teaching tools about key humanitarian issues.

The complexity of circumstances that can lead young people to offend; resulting in 'instant' actions that then set the course of their entire lives and which impact centrally on the control they have over their futures, along with how to reflect that truthfully, were central themes to the debate.

Anne Cassidy revealed that the Jamie Bulger murder case and popular media judgements on his two young killers had led her to write Looking for JJ. She also revealed that teenagers' subsequent comments on the bleakness and isolation facing JJ at the end of her first book had led her, in its sequel, to explore the possibility of a path which - if not necessarily ending happily - offered JJ a tiny element of control. Opening young people to chances for change and taking control, echoing real life initiatives such as restorative justice, were felt by the panel to be key elements in writing fiction for this age group.

"It was so good to hear from people who work with young people in difficulties, and realise that what I have written intuitively is not out of line with their realities," reflected Anne Cassidy. "It was also heart warming to hear that the outlook today for young people who offend is better than when I began writing Looking for JJ."

"Crime doesn't come from nowhere," said Juliet Lyons. "Anne Cassidy has helped us to understand how young people can get into terrible trouble and, in Finding Jennifer Jones, how they can start to emerge again."

"We were delighted to work with Hot Key and Scholastic UK on this event," said Andrea Reece who works on our partnerships with children's publishers. "In the audience were people who read Looking for JJ when it was first published, together with people who were coming new to both books, but everyone took away important insights from what Anne Cassidy and the panel shared."

The Six Book Challenge is used to increase literacy in many prisons and young offender institutes - we recently ran a One Quick Read One Prison project to get prisoners and prison staff reading the same book at the same time and Julian Barnes' donation of the Clarissa Luard Award enabled us to run creative writing workshops at ten YOIs.

Have you read Looking for JJ or Finding Jenifer Jones? Let us know what you think of the books via twitter facebook.