We have the winners of this year's Six Book Challenge prize draws. Thank you to everyone who entered - there were lots of you.

Paulina Rokoszny from the College of West Anglia has won our first prize from over 4300 entries for the completers' draw this year - seen above collecting her certificate for a writing competition as well as for the Six Book Challenge. She wins an all-expenses paid trip to London with a guest.

Paulina, who is from Poland, is a Level 1 / 2 student and has just completed an ESOL course at the College. She has taken part in the Six Book Challenge for the last two years through the Learning Resource Centre and with the full support of her tutor. Learning Resources Officer Liz Ford says: "We always have a large number of enthusiastic participants from the ESOL classes and from other departments cross-college. All of them get a lot of enjoyment out of taking part."

Runners-up, who each win a Kobo ereader, are Mark Cuthbert, who took part in the Challenge with a group of fellow learners at a day centre in Stockton with the support of the library service; Jarin Akter, an ESOL student at Oldham College; and Jack Flemon, a student at Activate Learning in Banbury.

Westminster Libraries have won the draw for public libraries which we've offered for the first time this year with the prize of an author visit. Having run the Six Book Challenge for several years, they've achieved a gold award in 2014 with 209 completers out of a participation figure of over 400. City Librarian Laurence Foe has coordinated the scheme with a wide range of partners including ESOL tutors at Westminster Adult Education Service (WAES), Westminster Kingsway College, the Migrants Resource Centre and the Chinese Centre in Charing Cross. Several completers celebrated their success at a special event at the WAES centre in Lisson Grove on Monday 7 July.

"The continuing demand for our Six Book Challenge programme in Westminster shows how valuable it is," comments Mike Clarke, Tri-borough Director of Libraries and Archives. "The Challenge is a great way to engage emerging readers, who might otherwise not think a library has anything to offer them." 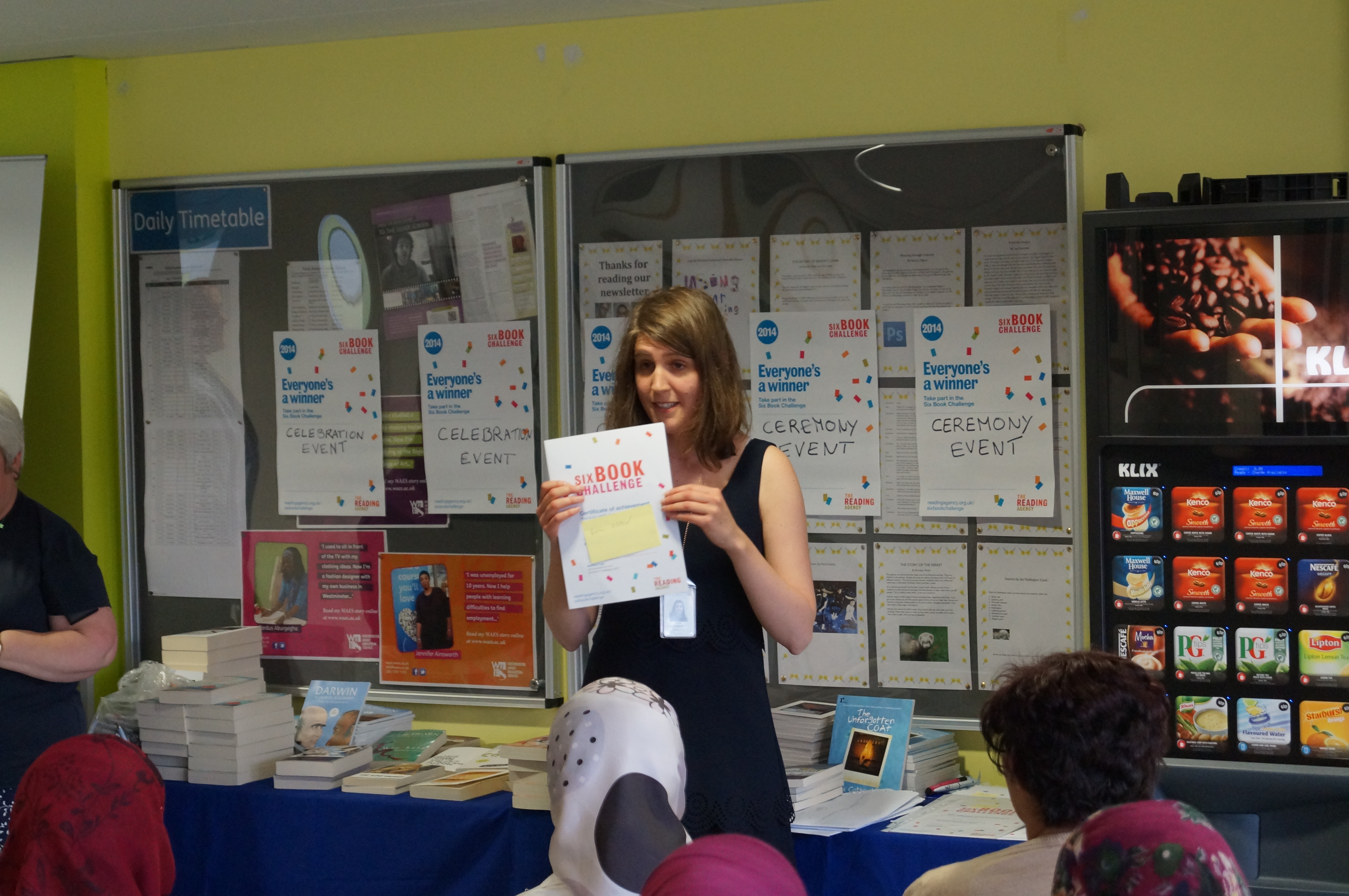 The draw for prisons has been won by HMP Edinburgh who will receive an author visit hard on the heels of an event with Andy McNab earlier in the year. This is excellent news as they have made great strides with the Six Book Challenge this year. Led by Kate King, the prison library has worked with peer tutors, Regimes Officers and Residential Officers, over a three-month period to recruit 205 offenders with 84 completing the scheme. Fifteen staff also took part, seven of whom completed.

"We really raised the profile of reading amongst staff and prisoners," says Kate, "and it is the first time staff and prisoners have been given certificates together. It's been an amazing year for the Six Book Challenge at HMP Edinburgh and we can only hope next year will be the same."

We're delighted that Bolton College has won the prize draw for colleges because, after five years running the Challenge, they have increased the people participating and completing the Challenge and developed more partnerships with local organisations each year. It's appropriate that they will receive a gold award this year for helping 272 people complete the Challenge.

She says: "I have seen the Challenge change so many students' lives over the years. Many students have returned to reading after not reading a book since they left school a considerable number of years ago, whilst others have made the time to renew their love of reading and have extended it into new genres which they wouldn't have considered before. For some students it has meant an opportunity to complete a book or to gain a certificate for the first time in their lives which has given a tremendous boost to their confidence."

Finally Cumbria Partnership NHS Foundation Trust have won the workplace prize which is offered in association with the Campaign for Learning's Learning at Work Week and Transworld Publishers who kindly offer a visit by one of their authors.

Suzan Hunter, Vocational Learning Facilitator, explains why they got involved: "Following the successful introduction of the Quick Reads 2013 within the Trust, which gave staff access to a number of books that could be read in a short amount of time, there wasn't any doubt that we would sign up for the 2014 Challenge as we are committed to supporting the well-being of our staff in a variety of ways. To date 84 members of staff have taken it up and feedback has all been very positive."

Nikki Bridson -Nelson, Development Lead, Cumbria Partnership NHS Foundation Trust's Learning Network, said: "As an avid reader of a wide variety of fictional and non-fictional books I was shocked to learn that 35% of adults don't read for pleasure. The Six Book Challenge provides our organisation with a platform to introduce staff to the world of books or perhaps coax individuals who felt that they were 'too busy' that they really do have time to read. Staff were delighted to find that magazines, newspapers, poetry in addition to plays and websites would count towards the Challenge which demonstrates that reading is accessible."

Do tell us your story about being part of or running the Six Book Challenge - we'd love to hear from you. Please get in touch with Genevieve Clarke.

If you work at a public library, college, prison or work place and are interested in running the Six Book Challenge visit our resources page.