The Six Book Challenge is being used in a special project in ten young offender institutions (YOIs) thanks to Booker-winner Julian Barnes choosing The Reading Agency for the Clarissa Luard Award when he won the David Cohen Prize last year. Julian is pictured below with Miranda McKearney, our CEO, and Mark Lawson, chair of judges for David Cohen. 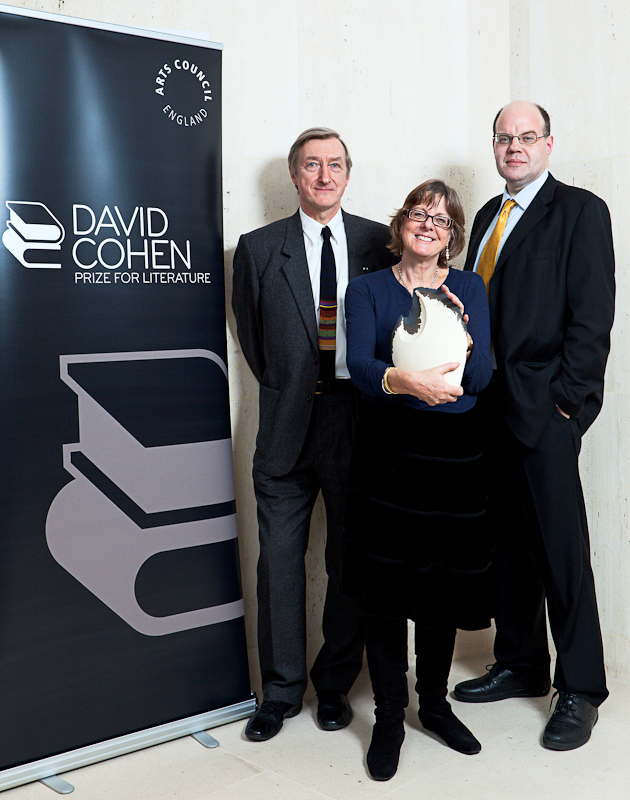 The aim is to engage 1000 readers (including prison staff) by early 2013. We have reached over 600 participants so far and, with some YOIs having only recently started the scheme, hope to achieve our target and, in addition, to ensure regular use of the Challenge in all of these institutions in future years.

As an icebreaker, our project manager David Kendall also ran a creative writing workshop for each YOI with the title Grimm 150 in which young offenders were asked to rewrite a traditional story/fairy story in exactly 150 words. Some of the stories appeared in the prisoners' newspaper Inside Time and others can be read below.

The approach has been successful both in engaging prisons that have not previously been involved in the Challenge and raising the attainment of those that have tried it before. Feedback from library staff, tutors and offenders tells us that it has introduced many offenders to the idea of reading for pleasure and, in the case of one young man at HMYOI Deerbolt, it was the Six Book Challenge that got him out of his cell for the first time in weeks.

Ron Sparks, Residential Principal Officer, HMYOI Deerbolt said, "Young prisoners who signed up to the Challenge have really utilised the library. For them it is like a release on the inside."

Once upon a time in a city called London there was a small place called Longate. There lived a family who was not very well known to the community because they were new to Longate. They never came out of their house and even if they did, it was as if no one ever saw them. It was like they were invisible, and this made the family very angry. It didn't feel fair for everyone to act as if they weren't there. One night they decided to kill everyone in Longate. All those who acted as if they were invisible. They left their house and went out into Longate. They killed everyone and then dragged the bodies into the dark woods. In the woods they turned everyone into werewolves, just like they were. Now all the people they'd killed would live again, and nobody would feel left out ever again.
HMP ISIS

I need her, I must keep her. Nobody must have her.
I do this not to hurt her but to protect her.
She is my sleeping beauty.

I saw how he looked at her, as if to give the impression he was her Prince Charming, as if his kiss could rescue her but he just wants to take her from me.
She needs me. I am her father, and she is my sleeping beauty.

She is so peaceful, so still, a thing of absolute beauty. This is why I must keep her, she must not be exposed to the cruel way of men. She is too pure, too innocent. She is my sleeping beauty.

If only she knew my reasons why, I know she would understand. He is not right for her. He only wants to take her away but no one can have her. She is my sleeping beauty.
HMP Glen Parva

'Colonel Dumpty at your service.'
'This is the King of England.'
'At your service, sir'.
'I have a task for you, Humpty'
'Oh yes, Sir?'
'You are to infiltrate the government. Tony Blair has stolen my crown. Humpty, I want you to get it back.'
Colonel Dumpty was pleased. It'd been a long while since he'd been on a mission.
'That will be all, Humpty'
'Yes, your Highness.'
So Colonel Dumpty got ten thousand men from the Pentagon flown over to Brize Norton, then in coaches to London armed to the teeth. Colonel Dumpty was so pleased. Then the battle started. There were guns blazing, Colonel Humpty was atop a wall but was sprayed with bullets and fell off the wall and all the King's Horses and all the King's Men couldn't put Humpty together again. And all the King could do was laugh at the success of his plan.
HMP Norwich

Once, in a town called Magherafelt, there lived three homeless people called Bill, Jeff, and Edward. They were squatting in an abandoned house. In the house the three tramps were drinking and taking heroin. They disposed of the needles in a corner before falling asleep on the floor. They were sleeping for hours with just the occasional snort or roll from one of them. People gathered outside the houses in high visibility jackets, and with them was a wrecking ball, which would huff and puff until full damage was done. The people told all residents to evacuate the area as they were demolishing the houses to build a government building. Bill, Jeff, and Edward were sleeping so they didn't hear them say 'We will knock your house down' several times. With a crash the house fell onto the tramps and killed them. The council never knew they were there.
HMP Hydebank

If you work in a prison please consider running the Six Book Challenge in 2013. For more information on new materials available for 2013 visit our 2013 packs page or contact Genevieve Clarke on genevieve.clarke@readingagency.org.uk.