Gerbrand Bakker's The Detour has been announced as the winner of the 2013 Independent Foreign Fiction Prize, an annual award for the best work of contemporary fiction in translation. Themes of infidelity, exile and isolation won over the judges of this year's Prize to give the author his second major prize win. His previous novel The Twin won the IMPAC Dublin Literary Award. Translator David Colmer will share the prize money with Bakker, in this unique award that recognises writer and translator equally.

Boyd Tonkin, judge and literary editor of The Independent said: "Gerbrand Bakker's tale of a Dutchwoman who goes missing from her own troubled life and seeks refuge in rural Wales combines mesmeric storytelling with an uncanny sense of place, and an atmosphere of brooding, irresistible menace. In David Colmer's pitch-perfect and immersive translation, this book will both linger in your imagination and, quite possibly, haunt your dreams as well." 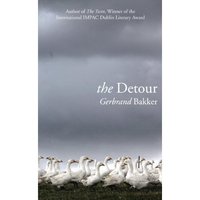 This year also saw an exciting development for the Independent Foreign Fiction Prize with The Readers' Project, a collaborative project with The Reading Agency, the Booktrust, English PEN and the British Centre for Literary Translation. The Readers' Project involved over 300 readers shadowing the six shortlisted titles in reading groups across the country. The readers gathered together at the Free Word Centre in Farringdon on 18 May for a mini-festival, featuring a talk from author Elif Shafak, a translation duel, a Google Hangout with the shortlisted authors and translators, and a vote on their favourite title, crowned the Independent Foreign Fiction Readers' Prize (IFFRP) winner.

The Readers' Project is funded by the Free Word Strategic Commissioning Fund and the NALD Futures Fund (administered by Writers' Centre Norwich) and aims to provide a detailed study of the barriers to readers' engagement with world literature and make recommendations for the trade to overcome them. The research will be promoted nationally and internationally in the second half of 2013.

Meet the reading groups who were part of The Readers' Project here and here. Let us know what you thought of the books on the shortlist by tweeting with the #iffp hashtag.