We have a new champion for the Six Book Challenge - top rugby league player Jamie Jones-Buchanan - in addition to Andy McNab, our Ambassador for 2013. An England international since 2005, Jamie, now 31, has played rugby league for the Leeds Rhinos throughout his professional career and has won six Super League championships with the club. He is also a keen reader and is supporting the Challenge as part of our new partnership with the Rugby League World Cup 2013 in the run-up to the international tournament in autumn 2013. 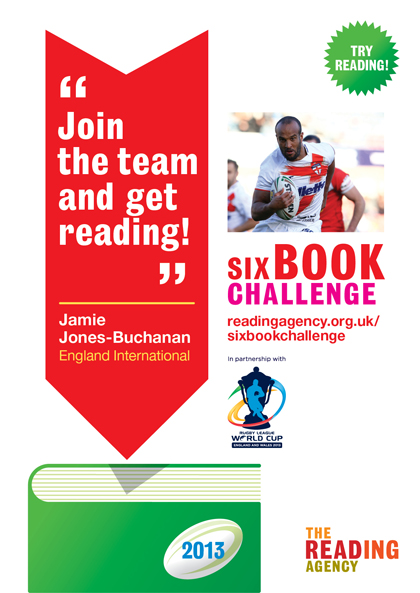 We are offering specially branded materials featuring Jamie and his support for the Challenge so that public libraries, colleges, workplaces and prisons can take the scheme to sports fans who might not otherwise pick up a book and enjoy it. Order before Christmas and we will aim to get you materials by late January. These include quotes from Jamie and book recommendations at all levels for rugby league enthusiasts.

The Six Book Challenge also has the full support of the organisers of the Rugby League World Cup 2013. "We're using the next major UK sporting event after the Olympics to inspire, motivate and educate as many people as possible," says Marketing Manager Mark Foster. "The Six Book Challenge is an important part of this."

This means that organisations running the Six Book Challenge will have the opportunity to bid for events featuring the World Cup trophy and key players so please get in touch if you'd like to be involved in this exciting new partnership for the Challenge.

Jamie only got into reading in his 20s and went on to take a degree in sports science at Leeds Metropolitan University. He is married with three children and reads to them regularly. He says:

"When I was young I used to see other people reading, especially girls, and I always wished I could read like that. But for me at that age it was futile - I would start reading something but I'd get to the end of the page and I'd have forgotten what I read.

"I didn't really start reading until I was about 24/25 years old; for me, my biggest starting point was Dan Brown's Da Vinci Code. I went on to read other Dan Brown books. They were the first fictional books I'd read as an adult - all the other books I'd read were manuals or factual books about science, because I loved the sciences.

"It was a bit like being able to go into someone's mind and read their thoughts; it's like being able to talk directly to them and understand their mind and point of view. You start to see life through the lens of someone else and it's contagious because through their experience you are experiencing and passing on new thoughts and images and ideas, and the world becomes wider and the way you see things changes. You start to understand others' views and your world view becomes less narrow and more tolerant and understanding, which I think is really important in the multicultural communities we have today.

"I read with my three sons as often as I can. I think it is important for them to have reading as something that happens regularly in their life and it's great when they come to me and say "Daddy I want a story." At their age they are like sponges and they soak so much up, so reading regularly is really important for them. 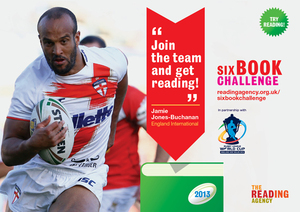 "My life is more rounded now because of reading. I take things from everything I read; each book is a new experience. My message to any rugby league fans out there thinking of signing up for the Six Book Challenge would be just give it a go. Don't be shy or embarrassed, even if you haven't read for a long time. No one will be judging you and it can only bring you good things.

"My advice would be to find something that you are interested in and then go and find some books about it so that you can find out more for yourself -- that's far better than someone giving you something to read just because they've enjoyed it or been interested in it.

"They say that you are what you eat. For me, reading is food for the soul. You are what you read, so join the Six Book Challenge team and get reading!"

If you work in a library, school, college or work place which is thinking of running the Six Book Challenge in 2013 please consider adding a rugby league element by using our special Rugby League World Cup branded materials.