Home › Adults › Cumberbatch, Cave, Anderson and Gaiman join together in praise of letters

Cumberbatch, Cave, Anderson and Gaiman join together in praise of letters

A star-studded event in praise of letters was held at the Tabernacle in London on 10 December 2013. We're very grateful to Canongate Books for hosting the event which raised over eleven thousand pounds for The Reading Agency. 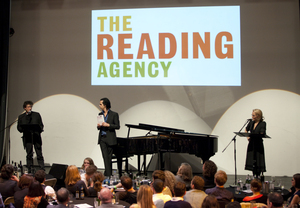 The evening also featured an auction of a copy each of To The Letter and Letters of Note, signed by of the performers. Hosted by Neil Gaiman (who delivered our annual lecture in October) and Gillian Anderson, with a little help from willing models Benedict Cumberbatch and Nick Cave, we were thrilled when the auction raised eleven thousand pounds.

Sandeep Mahal who works on our partnerships with publishers said: "Letters Live was a truly astonishing event. We are incredibly grateful to Canongate Books and to all the amazing performers for their time and energy, delivering such stunning readings. We are delighted by the money so generously donated to The Reading Agency and so proud to be the charity of choice for the LETTERS LIVE tour. It will make a huge difference in helping thousands of people to love reading and to continue our hugely important work with libraries to reach readers in every kind of community."

Inspired by Canongate's recent publication of Simon Garfield's To the Letter and Shaun Usher's Letters of Note (co-published in partnership with Unbound), the LETTERS LIVE series of performance events places both authors at the heart of an evening of live readings, images and music, which makes for a truly dynamic and memorable experience celebrating the importance and beauty of literary correspondence over the centuries.

Watch some videos from the event:

Benedict Cumberbatch reading a love letter written by Signalman Chris Barker in 1944 which is published in To The Letter by Simon Garfield.

Gillian Anderson reads a letter by Dorothy Parker written in May 1927 during an irritating and uneventful stay in hospital.