We are delighted that Mohamed Mahyoub, who completed the Six Book Challenge (now called Reading Ahead) when he was at Priestley College a few years ago, has been made Young Adult Learner of the Year in the 2015 Adult Learners' Week Awards by NIACE.

Now 23, Mohamed didn't speak any English when he arrived in Warrington from Yemen when he was 14. Less than ten years later, he is running his own business, studying for a PhD and helping young people in his community. 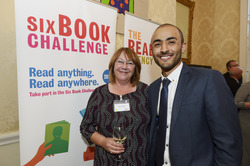 Mohamed says that taking part in the Six Book Challenge helped him to achieve his English GCSE, a vital step on the way to his success. He says: "The work you do is filled with positive energy, and it is life changing. I appreciate the contribution made to my development."

Mohamed attended our Six Book Challenge launch event at No.11 Downing Street last year with librarian Janet Puzylo, who nominated him for the award. She says: "He is an inspiration to everyone he meets. He came to this country as a young teenager with nothing but the love of his grandparents and a burning desire to succeed and help others. His achievements in learning are brilliant, especially considering where he started, and his dream to build a better world for others is being put into practical motion."

Now running his own charity, Mohamed believes that the opportunities he was given have helped him support others. In NIACE's video, he says: "From asking people to create an opportunity for you, to creating your own opportunities and creating opportunities for others: that's the power of knowledge."

Reading Ahead is the new name for the Six Book Challenge. Find out more about the programme.

Read other stories from young people and adults on how they have benefited from taking part.